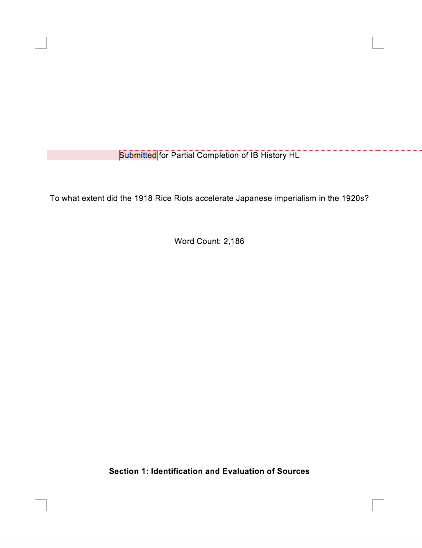 To what extent did the 1918 Rice Riots accelerate Japanese imperialism in the 1920s?

This investigation examines the research question: “To what extent did the 1918 Rice Riots accelerate Japanese imperialism in the 1920s?”. The two primary sources chosen are: (i) Rice riots and journalism: 100 years since the rice riots of the Taisho era by Kanazawa et al. (2016) and (ii) Observations on China and Korea by a Modern Japanese Politician: Based on Hara Takashi’s Diary by Youngsuk Kim (2013).

​The first source is a book that investigates the impact of the Rice Riot in the Taisho era based on published news articles at the time. Its very origin is valuable because the range of original news articles-the primary sources in the book-can be referred before analyzing historians’ perspectives on the event. If the argument had relied on the recollection of personal memory, one potential weakness could be the possibility of contamination of the source by 2016. Yet, because the source follows the officially published news articles in chronological manner, it prevents this potential limitation. As the news articles are supposed to be based on proven factual data, the newspapers provided in the book is valuable as they are more likely to have been verified before published. However, as the authors acknowledge themselves, it is important to bear in mind the political influence in the 1920s as the news media was suppressed freedom of speech under Terauchi cabinet. Yet, one bigger limitation of the source lies in its purpose as the book intends to focus on the journalistic aspect of the rice riot instead of providing insights into its political implications…