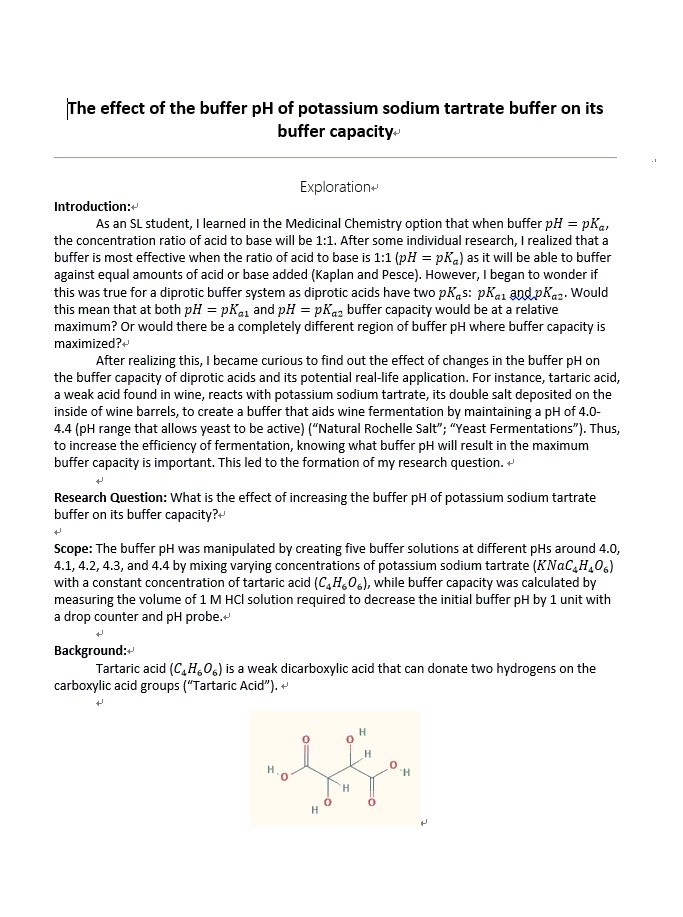 As an SL student, I learned in the Medicinal Chemistry option that when buffer , the concentration ratio of acid to base will be 1:1. After some individual research, I realized that a buffer is most effective when the ratio of acid to base is 1:1 () as it will be able to buffer against equal amounts of acid or base added (Kaplan and Pesce). However, I began to wonder if this was true for a diprotic buffer system as diprotic acids have two s: and . Would this mean that at both and buffer capacity would be at a relative maximum? Or would there be a completely different region of buffer pH where buffer capacity is maximized?

After realizing this, I became curious to find out the effect of changes in the buffer pH on the buffer capacity of diprotic acids and its potential real-life application. For instance, tartaric acid, a weak acid found in wine, reacts with potassium sodium tartrate, its double salt deposited on the inside of wine barrels, to create a buffer that aids wine fermentation by maintaining a pH of 4.0-4.4 (pH range that allows yeast to be active) (“Natural Rochelle Salt”; “Yeast Fermentations”). Thus, to increase the efficiency of fermentation, knowing what buffer pH will result in the maximum buffer capacity is important. This led to the formation of my research question.

Research Question: What is the effect of increasing the buffer pH of potassium sodium tartrate buffer on its buffer capacity?