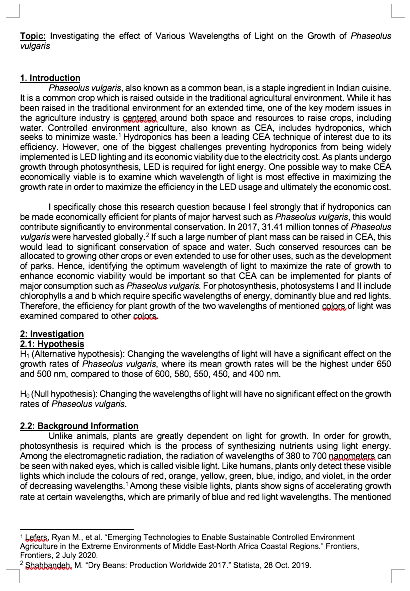 Topic: Investigating the effect of Various Wavelengths of Light on the Growth of Phaseolus vulgaris

Phaseolus vulgaris, also known as a common bean, is a staple ingredient in Indian cuisine. It is a common crop which is raised outside in the traditional agricultural environment. While it has been raised in the traditional environment for an extended time, one of the key modern issues in the agriculture industry is centered around both space and resources to raise crops, including water. Controlled environment agriculture, also known as CEA, includes hydroponics, which seeks to minimize waste. Hydroponics has been a leading CEA technique of interest due to its efficiency. However, one of the biggest challenges preventing hydroponics from being widely implemented is LED lighting and its economic viability due to the electricity cost. As plants undergo growth through photosynthesis, LED is required for light energy. One possible way to make CEA economically viable is to examine which wavelength of light is most effective in maximizing the growth rate in order to maximize the efficiency in the LED usage and ultimately the economic cost.

I specifically chose this research question because I feel strongly that if hydroponics can be made economically efficient for plants of major harvest such as Phaseolus vulgaris, this would contribute significantly to environmental conservation. In 2017, 31.41 million tonnes of Phaseolus vulgaris were harvested globally. If such a large number of plant mass can be raised in CEA, this would lead to significant conservation of space and water. Such conserved resources can be allocated to growing other crops or even extended to use for other uses, such as the development of parks. Hence, identifying the optimum wavelength of light to maximize the rate of growth to enhance economic viability would be important so that CEA can be implemented for plants of major consumption such as Phaseolus vulgaris. For photosynthesis, photosystems I and II include chlorophylls a and b which require specific wavelengths of energy, dominantly blue and red lights. Therefore, the efficiency for plant growth of the two wavelengths of mentioned colors of light was examined compared to other colors…