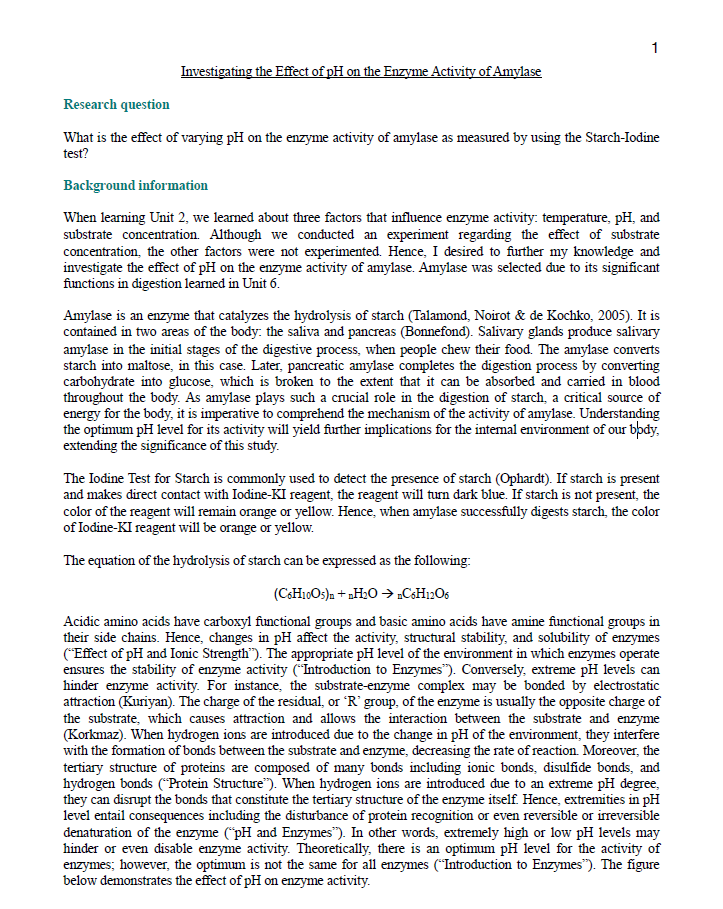 What is the effect of varying pH on the enzyme activity of amylase as measured by using the Starch-Iodine test?

Background information:
When learning Unit 2, we learned about three factors that influence enzyme activity: temperature, pH, and substrate concentration. Although we conducted an experiment regarding the effect of substrate concentration, the other factors were not experimented. Hence, I desired to further my knowledge and investigate the effect of pH on the enzyme activity of amylase. Amylase was selected due to its significant functions in digestion learned in Unit 6.
Amylase is an enzyme that catalyzes the hydrolysis of starch (Talamond, Noirot & de Kochko, 2005). It is contained in two areas of the body: the saliva and pancreas (Bonnefond). Salivary glands produce salivary amylase in the initial stages of the digestive process, when people chew their food. The amylase converts starch into maltose, in this case. Later, pancreatic amylase completes the digestion process by converting carbohydrate into glucose, which is broken to the extent that it can be absorbed and carried in blood throughout the body. As amylase plays such a crucial role in the digestion of starch, a critical source of energy for the body, it is imperative to comprehend the mechanism of the activity of amylase. Understanding the optimum pH level for its activity will yield further implications for the internal environment of our body, extending the significance of this study.
The Iodine Test for Starch is commonly used to detect the presence of starch (Ophardt). If starch is present and makes direct contact with Iodine-KI reagent, the reagent will turn dark blue. If starch is not present, the color of the reagent will remain orange or yellow. Hence, when amylase successfully digests starch, the color of Iodine-KI reagent will be orange or yellow.