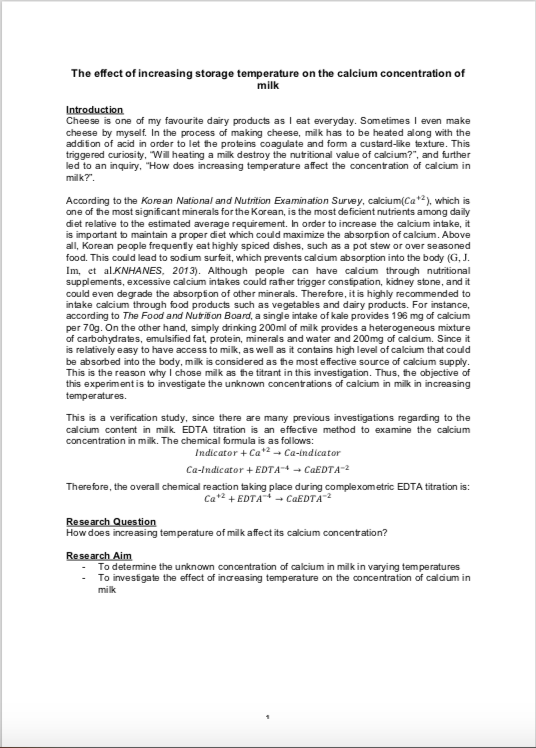 Cheese is one of my favourite dairy products as I eat everyday. Sometimes I even make cheese by myself. In the process of making cheese, milk has to be heated along with the addition of acid in order to let the proteins coagulate and form a custard-like texture. This triggered curiosity, “Will heating a milk destroy the nutritional value of calcium?”, and further led to an inquiry, “How does increasing temperature affect the concentration of calcium in milk?”.

According to the Korean National and Nutrition Examination Survey, calcium(#$), which is one of the most significant minerals for the Korean, is the most deficient nutrients among daily diet relative to the estimated average requirement. In order to increase the calcium intake, it is important to maintain a proper diet which could maximize the absorption of calcium. Above all, Korean people frequently eat highly spiced dishes, such as a pot stew or over seasoned food. This could lead to sodium surfeit, which prevents calcium absorption into the body (G, J. Im, et al.KNHANES, 2013). Although people can have calcium through nutritional supplements, excessive calcium intakes could rather trigger constipation, kidney stone, and it could even degrade the absorption of other minerals. Therefore, it is highly recommended to intake calcium through food products such as vegetables and dairy products. For instance, according to The Food and Nutrition Board, a single intake of kale provides 196 mg of calcium per 70g. On the other hand, simply drinking 200ml of milk provides a heterogeneous mixture of carbohydrates, emulsified fat, protein, minerals and water and 200mg of calcium. Since it is relatively easy to have access to milk, as well as it contains high level of calcium that could be absorbed into the body, milk is considered as the most effective source of calcium supply. This is the reason why I chose milk as the titrant in this investigation. Thus, the objective of this experiment is to investigate the unknown concentrations of calcium in milk in increasing temperatures…