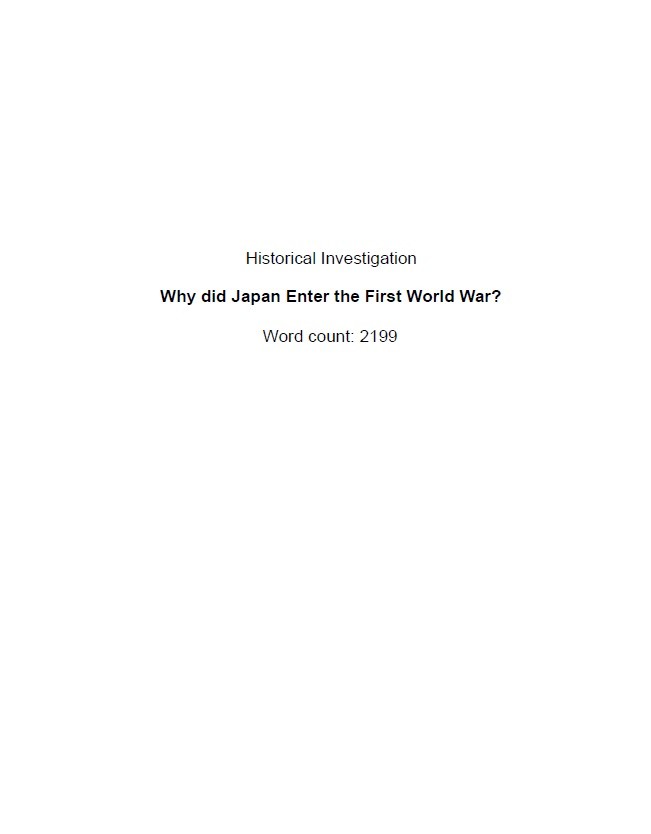 [본문내용]
Section A: Identification and evaluation of sources

This investigation will explore the question: Why did Japan Enter the First World War?, and will address the following causes, the Anglo-Japanese alliance and expansion into German and Chinese territories. The first source which will be evaluated is the “Japanese Ultimatum to Germany”, selected as it states the official Japanese motives for entering WW1. The second source which will be evaluated is Frederick R. Dickinson’s book, War and National Reinvention: Japan in the Great War, 1914-1919, chosen as it introduces numerous relevant perspectives on the foreign policies of Japan during WW1 relevant to its entrance in the war.

The first source is the “Japanese Ultimatum to Germany”, presented by Japanese Prime Minister Okuma on August 15, 1914. The origin of the source is valuable as it is a government document by the Japanese Prime Minister, and hence manifests the official reasons why Japan joined the war. Another value of the source is that it displays Japan’s relationship with Britain and Germany at the time. For instance, the source indirectly expresses how Japan regarded Germany as “a disturbance of peace in the Far East”. A limitation of the source is that it is subjective— as the purpose of the ultimatum is to present legitimate war aims to the international community, Japan only presents seemingly virtuous war aims and is unlikely to admit territorial aims. Furthermore, the scope is limited. As this ultimatum was sent on August 15, 1914, historians cannot know from this source alone if Japan’s war aims changed after the ultimatum was presented, or if Germany complied with Japan’s demands. The wording of the content is vague as well; Japan claimed the “eventual restoration” of Kiaochow to China (Okuma). This limits…