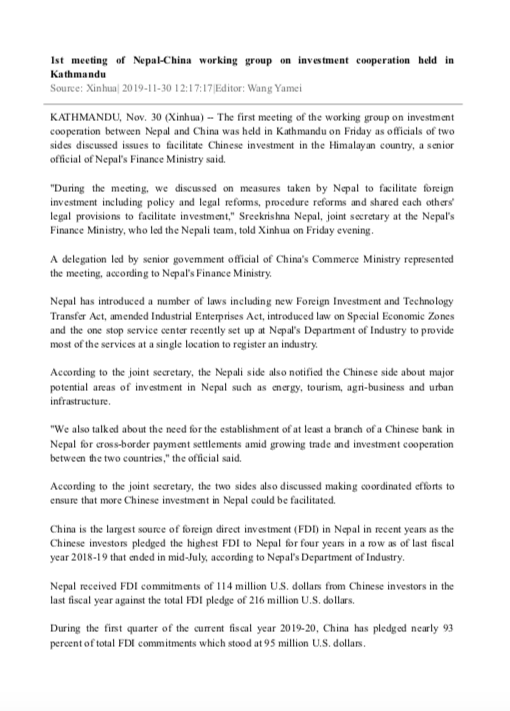 KATHMANDU, Nov. 30 (Xinhua) — The first meeting of the working group on investment cooperation between Nepal and China was held in Kathmandu on Friday as officials of two sides discussed issues to facilitate Chinese investment in the Himalayan country, a senior official of Nepal’s Finance Ministry said.

“During the meeting, we discussed on measures taken by Nepal to facilitate foreign investment including policy and legal reforms, procedure reforms and shared each others’ legal provisions to facilitate investment,” Sreekrishna Nepal, joint secretary at the Nepal’s Finance Ministry, who led the Nepali team, told Xinhua on Friday evening.

A delegation led by senior government official of China’s Commerce Ministry represented the meeting, according to Nepal’s Finance Ministry.

Nepal has introduced a number of laws including new Foreign Investment and Technology Transfer Act, amended Industrial Enterprises Act, introduced law on Special Economic Zones and the one stop service center recently set up at Nepal’s Department of Industry to provide most of the services at a single location to register an industry.

According to the joint secretary, the Nepali side also notified the Chinese side about major potential areas of investment in Nepal such as energy, tourism, agri-business and urban infrastructure.

“We also talked about the need for the establishment of at least a branch of a Chinese bank in Nepal for cross-border payment settlements amid growing trade and investment cooperation between the two countries,” the official said.

According to the joint secretary, the two sides also discussed making coordinated efforts to ensure that more Chinese investment in Nepal could be facilitated…