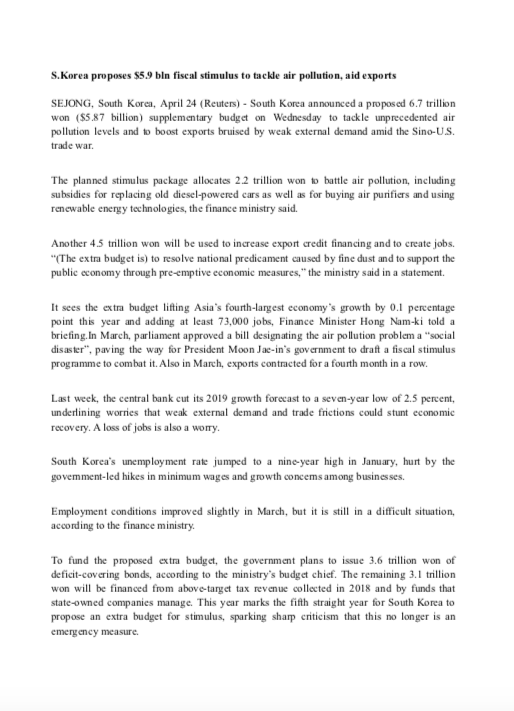 Another 4.5 trillion won will be used to increase export credit financing and to create jobs. “(The extra budget is) to resolve national predicament caused by fine dust and to support the public economy through pre-emptive economic measures,” the ministry said in a statement.

It sees the extra budget lifting Asia’s fourth-largest economy’s growth by 0.1 percentage point this year and adding at least 73,000 jobs, Finance Minister Hong Nam-ki told a briefing.In March, parliament approved a bill designating the air pollution problem a “social disaster”, paving the way for President Moon Jae-in’s government to draft a fiscal stimulus programme to combat it. Also in March, exports contracted for a fourth month in a row.

Last week, the central bank cut its 2019 growth forecast to a seven-year low of 2.5 percent, underlining worries that weak external demand and trade frictions could stunt economic recovery. A loss of jobs is also a worry.

South Korea’s unemployment rate jumped to a nine-year high in January, hurt by the government-led hikes in minimum wages and growth concerns among businesses.

Employment conditions improved slightly in March, but it is still in a difficult situation, according to the finance ministry…