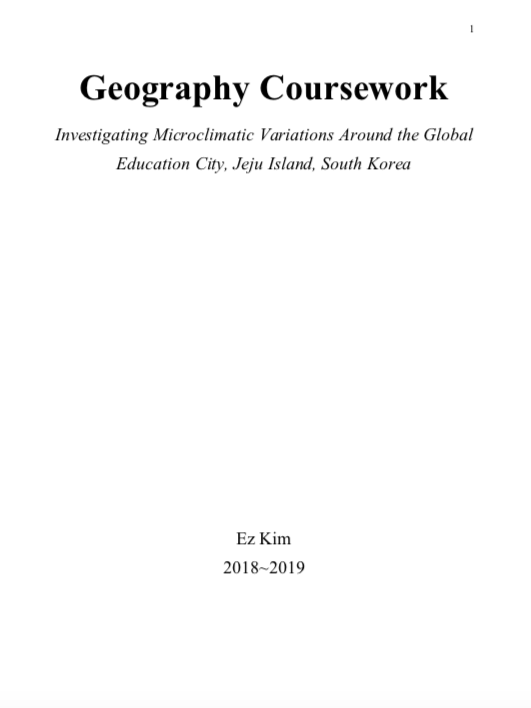 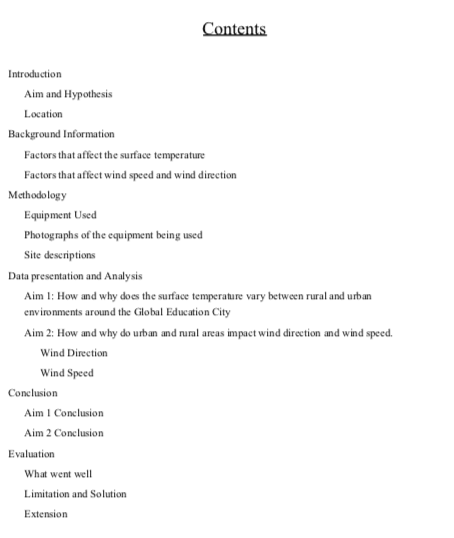 In my introduction, I will be talking about where Jeju Island in Korea is located and describe the geographic characteristics around it. I chose to investigate the following:

Aim 1:​ ​How and why does the surface temperature vary between rural and urban environments around the Global Education City?
Hypothesis 1​: ​If we measure the surface temperatures of the five rural sites and five urban sites in the GEC, I think that the surface temperatures in urban areas will be much higher than in rural areas as paved surfaces, such as concrete and asphalt absorb most of the sunlight and produce substantial amount of heat due to low specific heat capacity. Combustion gas from cars and the hot wind from air conditioning fans cause anthropogenic heat. In contrast, high specific heat capacity of natural materials and evapotranspiration of plantation and trees in rural areas account for the reason why they have a relatively low temperature.

Aim 2​: ​How and why do urban and rural areas impact wind speeds and wind directions?
Hypothesis 2​: If we measure the wind speeds of the ten sites, I think that urban areas will have a lower speed than in rural areas as tall and large buildings reduce the wind speed due to friction while in rural areas, where lands are unblocked and stretched widely, it creates less friction between the surface and the wind.
If we measure the wind direction of the ten sites, wind directions in urban areas will be more varied as obstacles block the wind and prevent the wind from retaining constant direction. In contrast, rural sites have an open terrain, which prevents sudden direction change of the wind.

The island is situated at the South sea of the Republic of Korea. Jeju is where tourism take a large portion of the economy, due to a wide range of activities including hiking on Halla-san (a mountain known for its highest peak of South Korea) and walking along the Olle trail (routes that passes through various landscapes along the coast). Jeju is a good place to study microclimate, because it has rural and urban areas in close proximity with lots of different conditions…