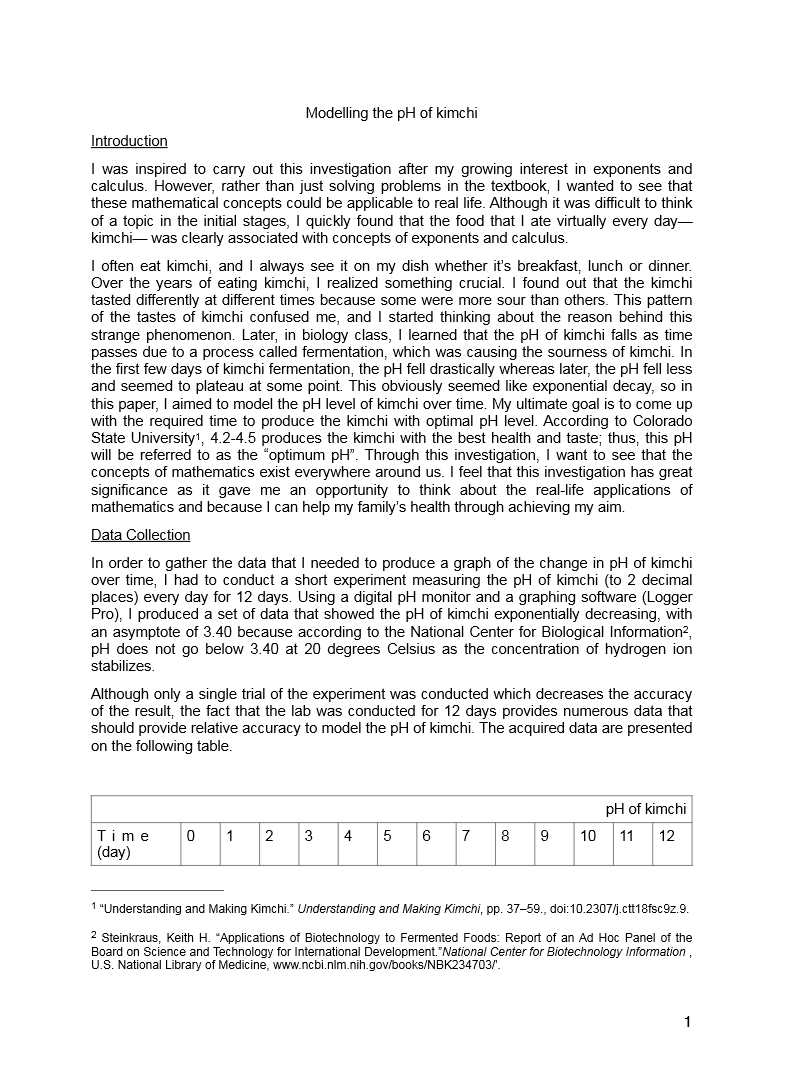 Modelling the pH of kimchi

I was inspired to carry out this investigation after my growing interest in exponents and calculus. However, rather than just solving problems in the textbook, I wanted to see that these mathematical concepts could be applicable to real life. Although it was difficult to think of a topic in the initial stages, I quickly found that the food that I ate virtually every day— kimchi— was clearly associated with concepts of exponents and calculus.

I often eat kimchi, and I always see it on my dish whether it’s breakfast, lunch or dinner. Over the years of eating kimchi, I realized something crucial. I found out that the kimchi tasted differently at different times because some were more sour than others. This pattern of the tastes of kimchi confused me, and I started thinking about the reason behind this strange phenomenon. Later, in biology class, I learned that the pH of kimchi falls as time passes due to a process called fermentation, which was causing the sourness of kimchi. In the first few days of kimchi fermentation, the pH fell drastically whereas later, the pH fell less and seemed to plateau at some point. This obviously seemed like exponential decay, so in this paper, I aimed to model the pH level of kimchi over time. My ultimate goal is to come up with the required time to produce the kimchi with optimal pH level. According to Colorado State University1, 4.2-4.5 produces the kimchi with the best health and taste; thus, this pH will be referred to as the “optimum pH”. Through this investigation, I want to see that the concepts of mathematics exist everywhere around us. I feel that this investigation has great significance as it gave me an opportunity to think about the real-life applications of mathematics and because I can help my family’s health through achieving my aim.

In order to gather the data that I needed to produce a graph of the change in pH of kimchi over time, I had to conduct a short experiment measuring the pH of kimchi (to 2 decimal places) every day for 12 days. Using a digital pH monitor and a graphing software (Logger Pro), I produced a set of data that showed the pH of kimchi exponentially decreasing, with an asymptote of 3.40 because according to the National Center for Biological Information2, pH does not go below 3.40 at 20 degrees Celsius as the concentration of hydrogen ion stabilizes…